Subaru Clutch Forks Cracking Under Pressure
Verus to the Rescue!
19 January, 2017 by

Subarus have roamed the streets, tracks, and dirt for decades, with hundreds of thousands of upgrades available for nearly every aspect of these beloved cars.  Yet, one crucial part seemed to be passed over, the clutch fork!  The clutch fork’s job is simple, disengage the clutch when you want to change gears.  However, what happens if that clutch fork bends, or worse, breaks under pressure?!?!

How did Verus get Forked into Helping?

Sometime in May (2016), a customer contacted us regarding this issue with his FRS/BRZ clutch fork, various other owners had complained and a few even broke their forks already.  At first, we did not believe it; it is a simple part, 3mm wall steel should handle the loads, and it is not exactly rocket science.  The further we dug into the issue and the more people we spoke to, the more we realized we needed to attempt to come up with a solution.

What is Occurring and Why?

Like most components original equipment manufacturers design, they are designed for certain loads and service life.  When enthusiasts, like all of us, install a stronger clutch and heavier sprung pressure plate to deal with more horsepower and torque, that clutch fork is being worked extremely hard.  As engineers, we would say the fork is being worked near or even past the materials’ yield strength and is being plastically deformed.  The continued operation creates micro stress fractures that will continue to propagate until ultimate failure and fracture occur.

In the below section, we’re going to do our best to give a small crash course into material properties, yield strength, deformation, and stress.  The content is a bit dry but is important to fully understand what is occurring to the clutch fork.  Our focus will be metal material properties as that is what is used here.

Yield strength is an indication of the maximum stress that a material can see without causing plastic deformation.  So yield strength, typically given in PSI or kPa/, is the numerical cross-over point from elastic (good) to plastic (bad) deformation. 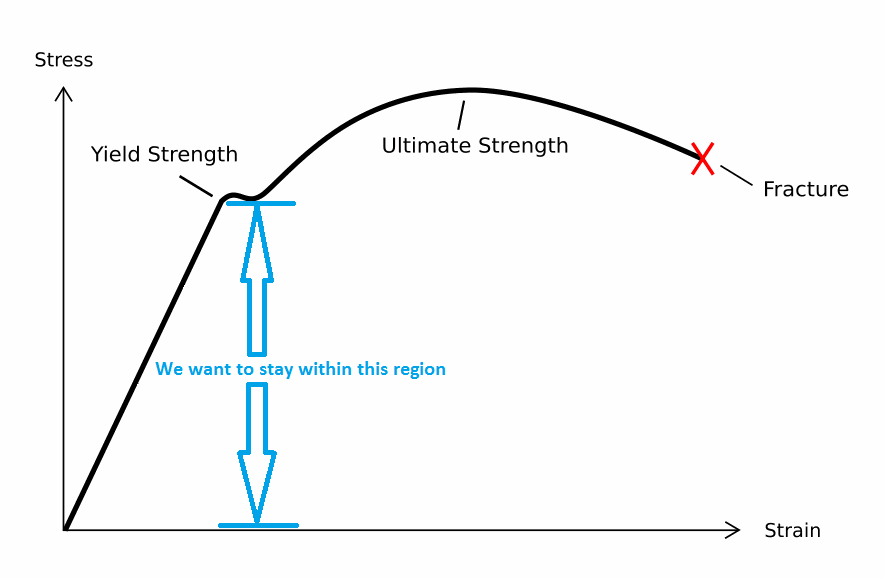 What the fork Subaru?

In Subaru’s defense, they did not plan or intend the clutch fork to be used with pressure plates 2, 3, and 4x the strength of OEM.  To keep costs as low as possible, they used what was necessary and nothing more.  But as enthusiasts, we want more!

To move forward, we need a baseline to start from.  This allows us a starting point to compare to, as well as give us visuals on where the clutch fork needs improvements.  With a pair of calipers, we set out to recreate the OEM units in CAD for analysis purposes. 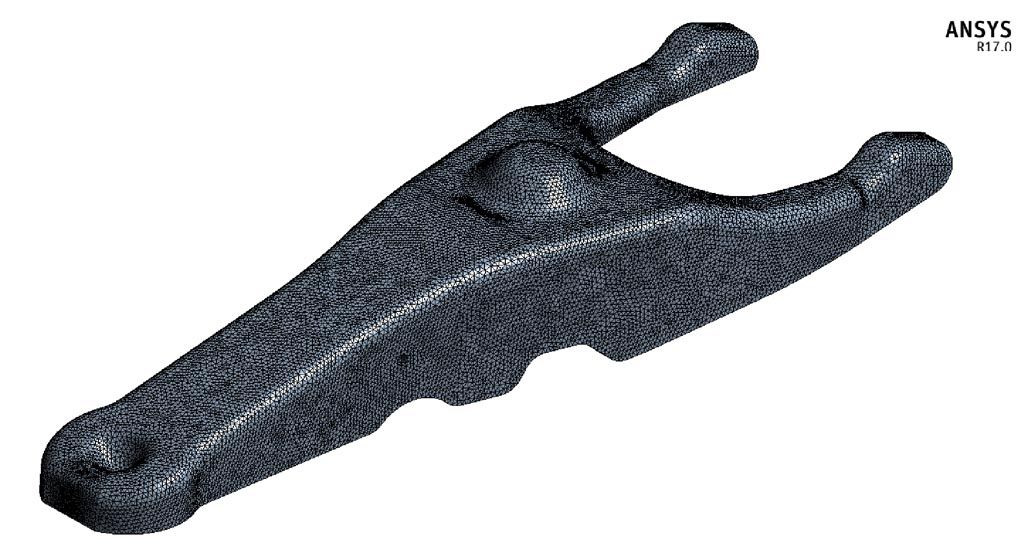 Let’s Look at What We Are Dealing With

For complex situations like this, Verus practices Computer-Aided Engineering (CAE).  In this case, that would be using Finite Element Analysis (FEA).  Our analysis software of choice is ANSYS.  ANSYS is at the top tier of analysis software and is used in over 90% of the top 100 fortune 500 companies, F1, NASCAR, etc. It is a very powerful software.

So with all the inputs plugged in like material properties, loading, and fixturing, after running mesh sensitivity studies, and setting up the legend correctly, below are some photos of the von-mises stress analysis on the OEM clutch forks.  The color red is set to yield strength, anything in pink is above yield strength, cooler colors (green/blue) are lower stresses.

FRS/BRZ/GT86 Clutch Fork in ANSYS Mechanical.  Lots of areas over yield stress, this is why they are failing with upgraded pressure plates.

Subaru WRX Clutch Fork in ANSYS Mechanical.  Significantly stronger than the FRS/BRZ/GT86 clutch fork but still will cause trouble with upgraded pressure plates.

What Are We Looking At and Why Did We Do This?

First things first, what we are looking at are graphical representations of the stress the clutch fork sees in a highly loaded pressure plate situation.  What is of most importance to us, is viewing the areas near, at, and above yield strength. The typical analysis set the legend from minimum to maximum stress the unit sees, but this doesn’t give us an easy to read indication of problematic areas.  Simple solution, change the legend so that the max legend value is yield strength and we can quickly and easily view what is happening.

We did this initial analysis to visualize trouble areas and give us a starting point to compare our upgraded design with.  Without this visualized data, we would be guessing where and how to make the design stronger.  Ultimately, this allows us to quantifiably improve the design faster as well as design a better product at the end of the day.

Time to Fix This Issue!

Using the information gathered from the OEM FEA analysis, we are able to methodically improve the design.  First, we wanted to machine this from a stronger material than stamped sheet steel, so we chose 4140 Chromoly steel.  In the annealed state, 4140 is 12% stronger in yield strength than typical sheet steels.  We then increased the wall thickness by 25% minimum throughout.  Finally, we removed the major stress rising locations found in the initial analysis.

The clutch fork no longer exhibits areas of stress over the material’s yield strength.  This is great news!  The clutch fork should withstand even the strongest clutches on the market and last significantly longer than the OEM unit.  The reduced clutch fork flex translates to a more consistent clutch pedal feel as well, which is great as driver feedback is improved.

Time to Up-Shift into Prototypes

Knowing what we can expect from a machined part using CAE, we can build a rapid prototype from plastic to test fitment knowing full well our improved design will withstand the loads.  Rapid prototypes save time, reduce costs, and improve part fitment before ever cutting into a piece of metal.  This technology is absolutely game-changing for manufacturing! 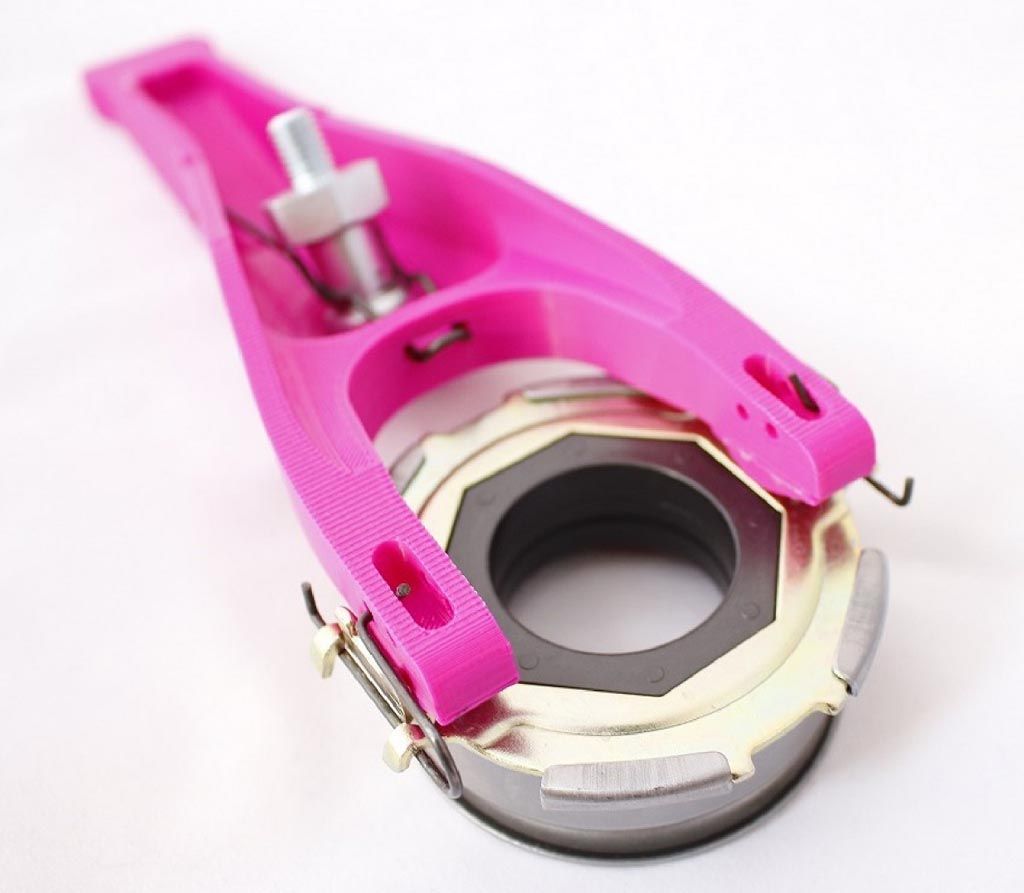 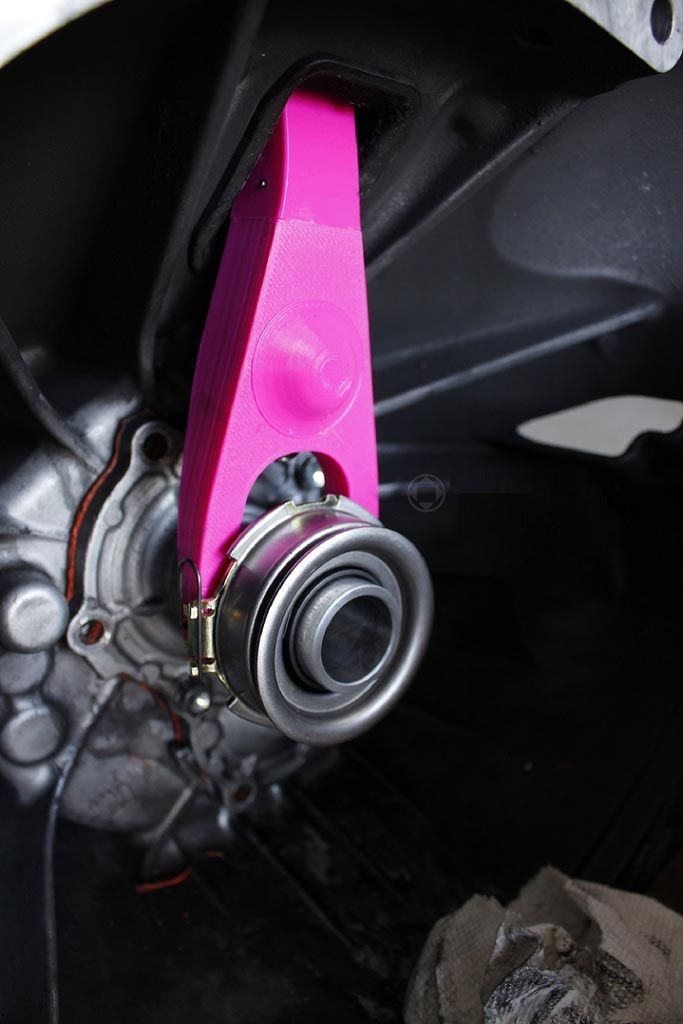 Production Ready, Clutch Out, and Back on the Gas 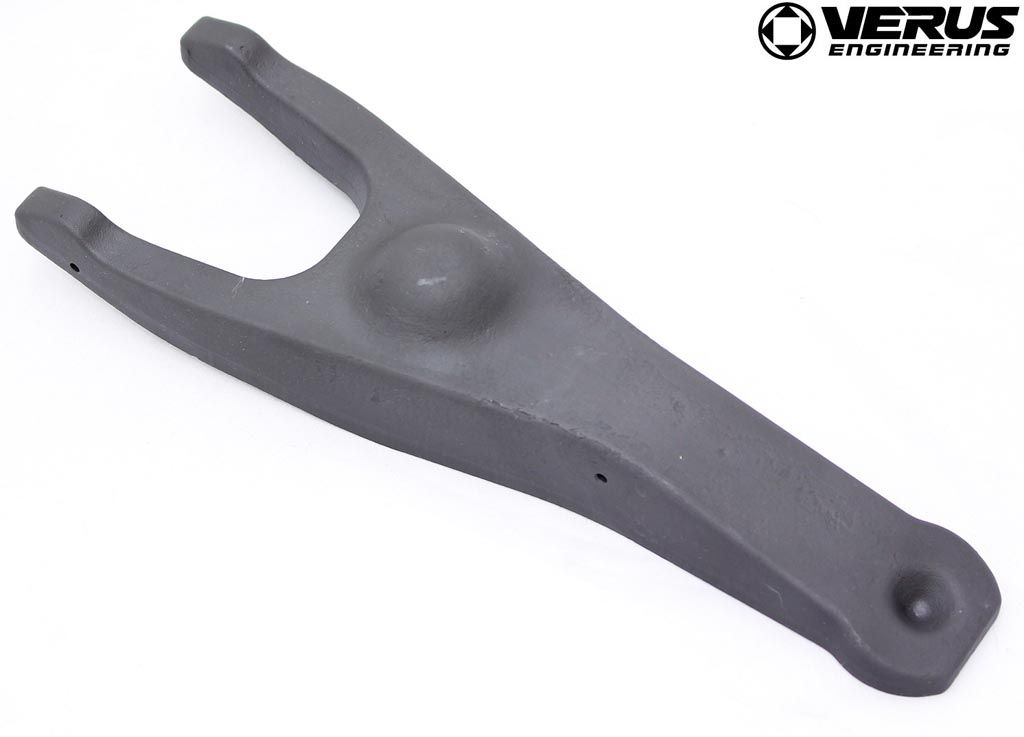 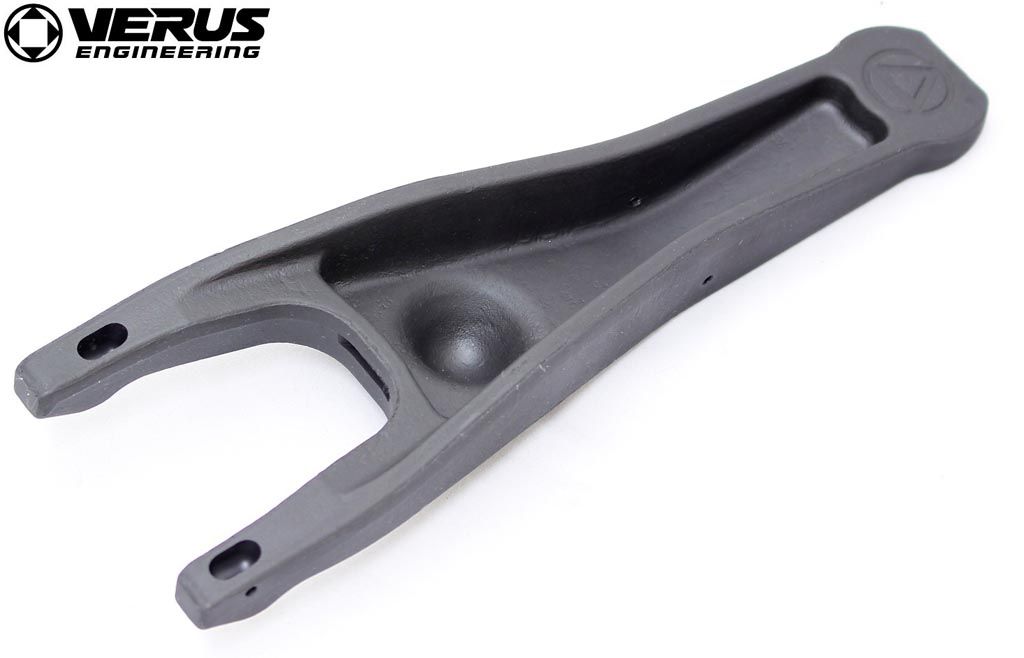 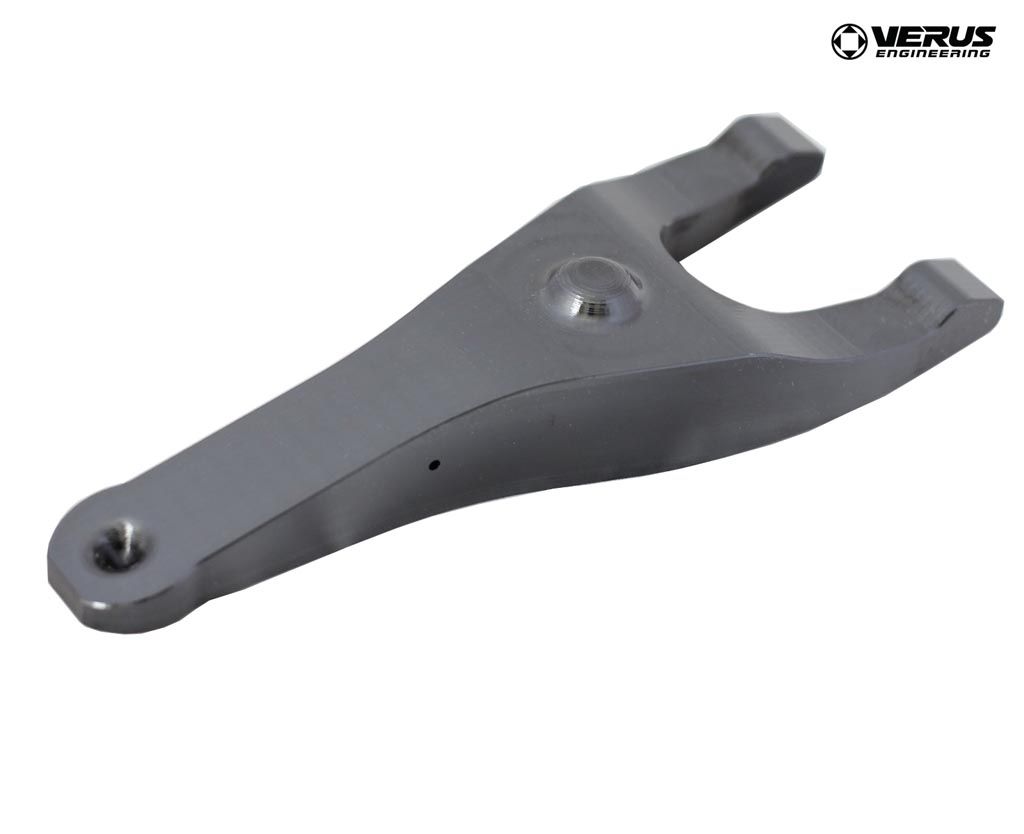 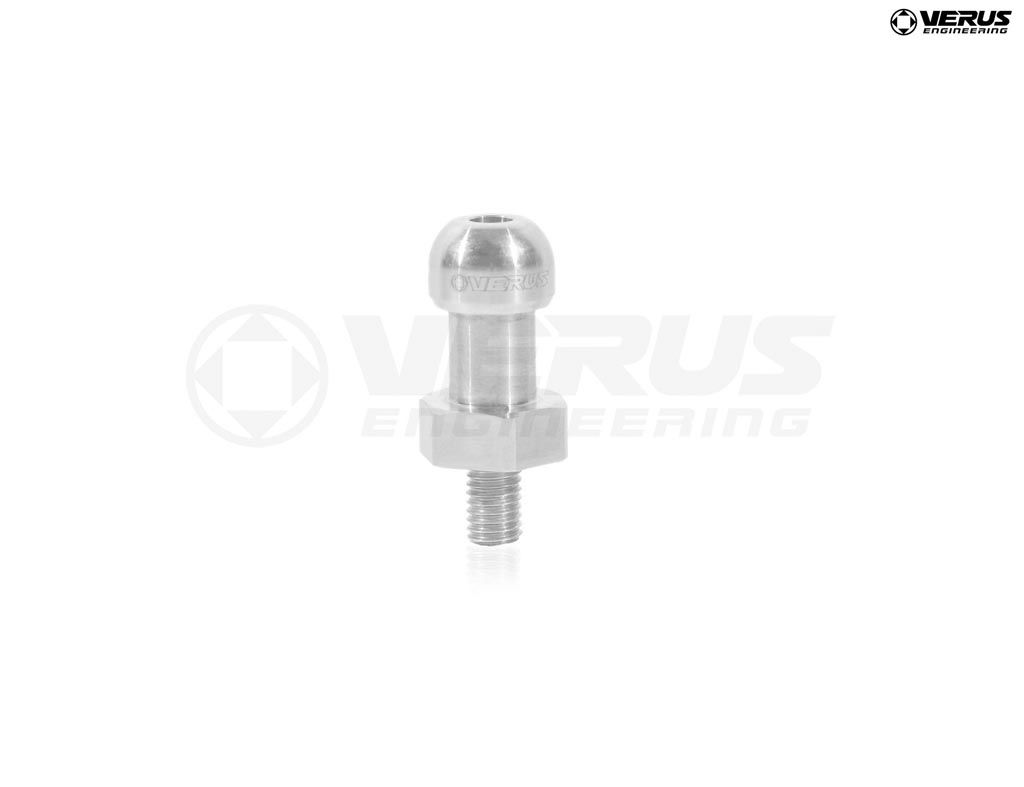 Read Next
Radiator Fans - In Depth Explanation and Information