Wind tunnel testing is another experiment, like CFD, to help validate aerodynamic changes.  The reason for writing this short excerpt is to help clarify some of the misconceptions about wind tunnel testing. First, let's start with a little history of wind tunnels.

The ‘Whirling Arm’ apparatus was the first wind tunnel if it could be considered one. This was in the mid-1700s to the 1800s. Francis Wenham was not happy with his experiences with the whirling arm, so he, with the British Aeronautical Society built the first wind tunnel in 1871. In 1900, Osborne Reynolds (Reynolds number, a ratio of inertial forces to viscous forces) proved that a scale model could exhibit the same flow pattern as a full-scale model. During World War II there were rapid advances in wind tunnel and aerodynamics. This led to the United States building a 400 mph wind tunnel and Germany having three supersonic wind tunnels capable of Mach 4.4 by the end of the war.

What do wind tunnels idealize? 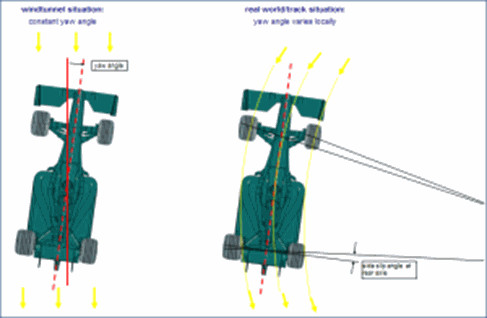 5. Sting Interference – The sting holds the model in place, and can also be attached to the wheels. 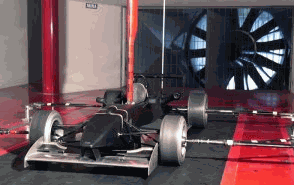 6. Wheel Lift – Wheel lift is not usually measured in a tunnel.

7. Model is not moving – aka, relative motion isn’t the same.

Wind tunnel data is precise but saddled with the inaccuracy of simulation; road data is free from these inaccuracies but is not precisely measured. Anyone who will quote you extremely accurate numbers is most likely trying to sell you something.

We are not saying that CFD is more or less accurate than a wind tunnel either.  CFD can and will simulate certain situations that are hard or impossible to simulate in a wind tunnel, but the outputs are only as good as the inputs.  We try our best to accurately depict real-world situations in our cases but heavily study the change from one case to the next, to improve and document our results.